Why Perfectionism Is Killing Your Opportunities

You take great pride in your work.

When you do something, you do it well. It’s your reputation.

You care too much about your success, your career, your customers, and your own reputation to do shoddy work. You don’t skimp.

You know the devil is in the details, and you’ll fight the good fight all day, every day.

In other words, you’re the best of the best. And you plan to keep it that way. 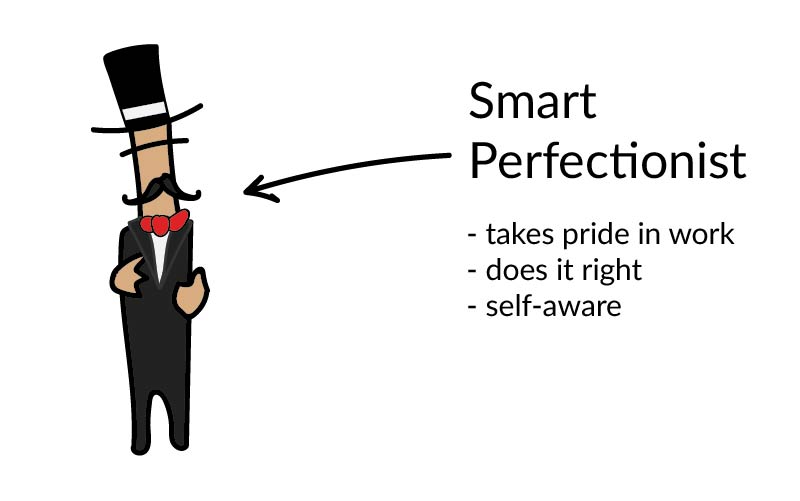 You say these things to your spouse. To your friends. To the co-workers who are secretly in on your plans to (eventually) go solo. 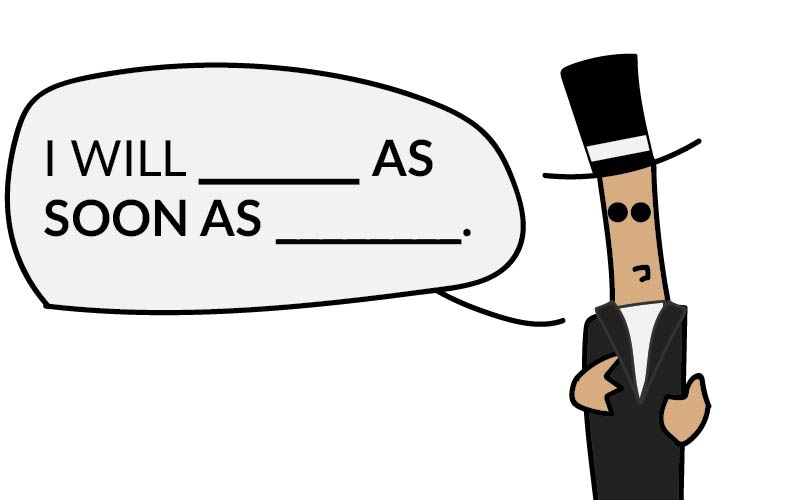 Your commitment to quality is respectable. But I have some hard news for you.

Your perfectionism is doing more harm than good.

If you’re a perfectionist who puts in 100-and-something percent of the effort to do stellar, flawless work, and your perfectionism is the thing stopping you from getting started, you’re hurting yourself.

Because while you primp, brave dummies are out there winning the work. 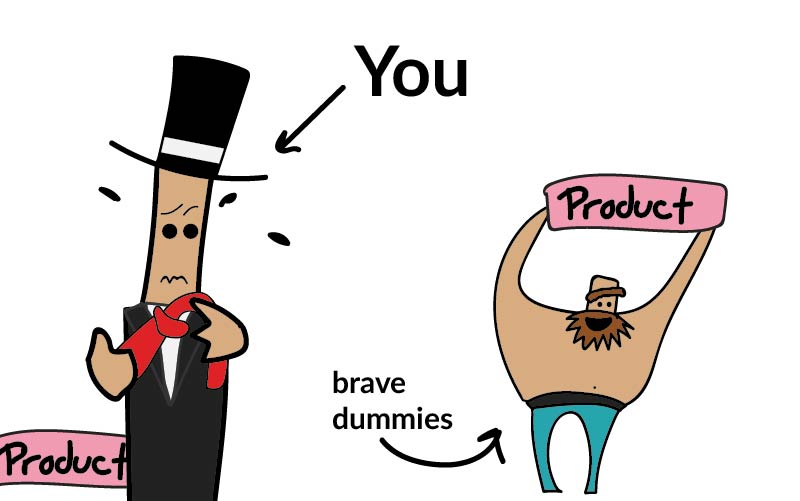 While you vex over getting your website and social profiles and badges in order, brave dummies are fumbling through dozens of prospects and landing clients.

While you hem and haw whether or not your already-3,500-word guide is authoritative enough, brave dummies are shilling 300-word bowls of word salad pulled from half-remembered TED Talks. And they’re getting praised for it. (Don’t believe me? Check LinkedIn.)

While you spend hours toiling through online course after online course, brave dummies are making up tactics on the fly … and getting paid to do so.

And unless you stand up and do something, you’re just letting it happen.

Now, you might be thinking, “Wait, Jeffrey. I know where this is going. You’re just telling me I need to stop being just a coward.”

No, you’re not a coward

If you’re truly the kind of person I described at the start of the post, you’re not a scaredy-cat. Not by a long shot.

It takes a lot of guts to be a perfectionist. True perfectionists are vulnerable enough to learn how to do things right from other people. You’re careful, methodical, and conscientious.

That’s not craven. But it’s standing in your way, and you need to overcome it.

You’re not lazy, either

You’ve been told by plenty of gurus that you need to get off your lazy butt anus and just do the work. You know, “Just do it.”

But again, if you’re the kind of perfectionist I described, you’re far from lazy.

You’re willing to work weekends to get that Google AdWords certification.

You’re willing to read multiple books a month so you can assimilate new knowledge and skills while your friends are out shopping for Hygge-scented candles. (I don’t know if that’s a thing but boy did it feel fun to type.)

You are not lazy.

You are not a coward.

But you are in trouble, because …

While you primp, Dumb Berserkers get the jobs

And you’re smart. You’re self-aware. You approach new situations with a certain humility.

Smart Perfectionists think: “I’ve never done this before. I’d better figure it all out first. I need to do this right.”

You’re painfully aware of your weaknesses, and you immediately get to work on patching them up. You figure if you’re going to attempt something, you need to be 100% sure you’re in tip-top position to do so. 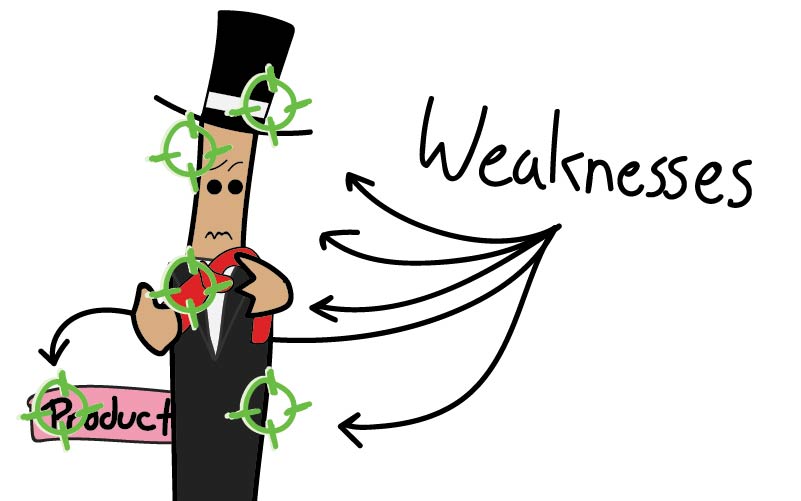 But Smart Perfectionists aren’t alone in this game.

You also have Berserkers.

These are the folks who jump in headfirst. They shoot first and ask questions later. They’re the cowboys and the pirates.

A lot of them are dumb. Not necessarily low-IQ. but lacking in actual skill and awareness.

Dumb Berserkers think: “Well, I gotta make a living, right? How hard can it be?”

They have no idea how hard it is. And they have no idea what their weaknesses are. All they know is that something needs to be done, and they want to do it—or at least get paid to do it.

And before we get all high-and-mighty, let’s remember: the Dumb Berserkers look at the Smart Perfectionists and see a bunch of insecure, self-conscious weaklings without any guts. 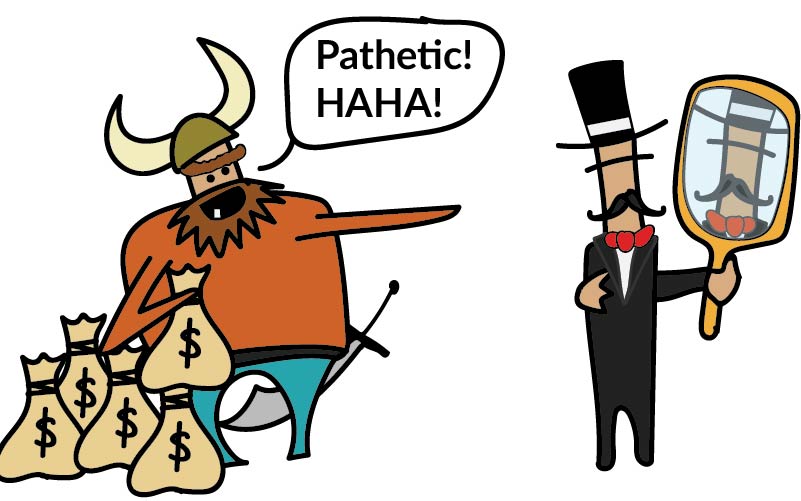 But let’s not get caught up on what they think. What they think doesn’t matter. We care what the market thinks.

The market thinks: “I really need someone to do this.” 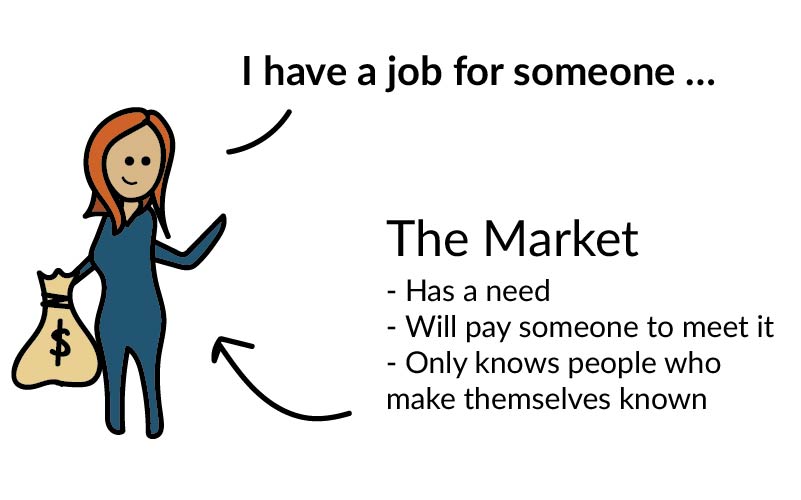 You can see where this is going. You do all the work of figuring out how to do the work, but the Dumb Berserkers go to market. The brave ones figure it out themselves and get paid. Sometimes they fail, and it’s super embarrassing. But that’s a risk they’re willing to take. 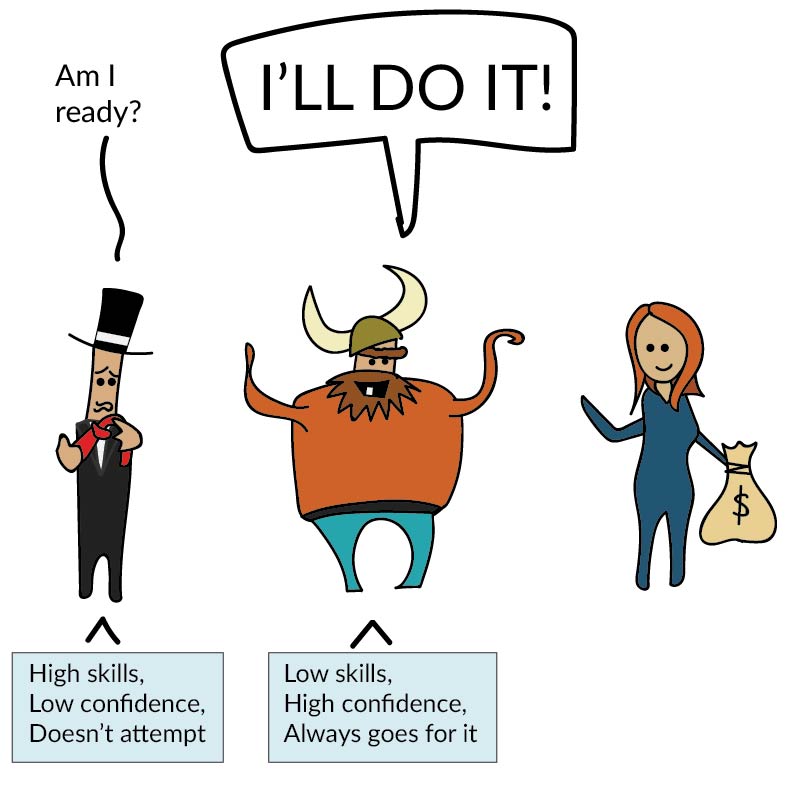 And what about afterwards?

The brave dummy’s client thinks, “Well, that’s great! Somebody got that job done.”

And when people ask them if they have anyone to recommend for a job, who comes to mind? That brave dummy does. You’re just left with a head full of knowledge but nothing to show for it.

It would be bad enough if the effect stopped there. But it doesn’t!

Here’s the thing: it’s not like all the Smart Perfectionists and Dumb Berserkers got together at one point in time to start taking on jobs. Instead, this dance has been going on for a long time.

That means when Smart Perfectionists like you start trying to get a promotion or land a side gig or prospect new clients, you see a mass of other people in the space who have WAY MORE EXPERIENCE than you.

And naturally, you approach this scenario with self-awareness. 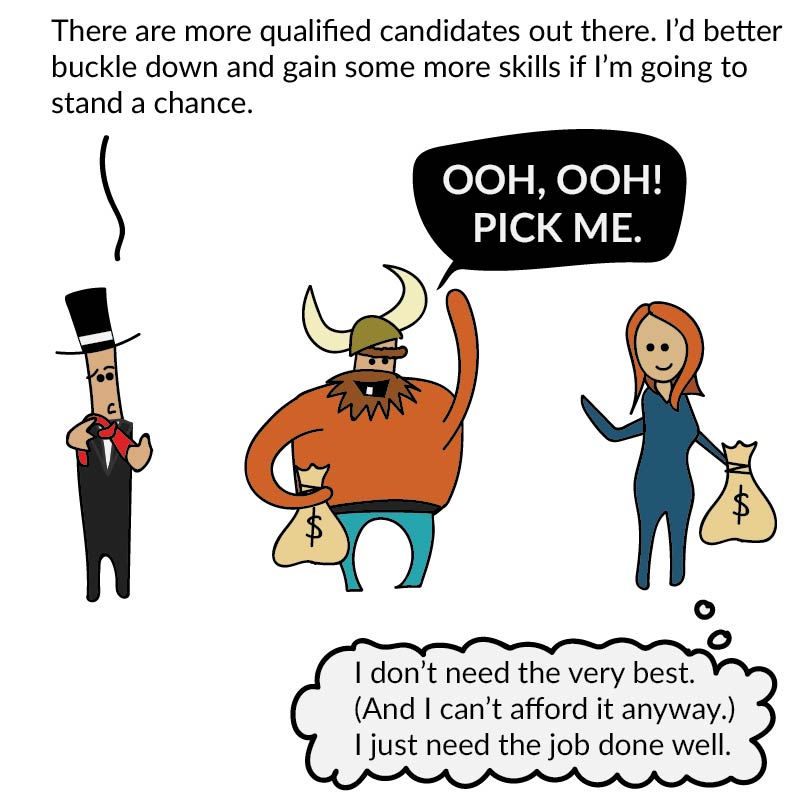 Smart Perfectionists think: “Dang. Look at all these people who have been doing this for so much longer than I have. They have all this experience I don’t have. Why would anyone choose me if they could have one of these experts? I’d better spend a few extra months sharpening my skills so I can better compete.”

Such a reasonable thing to think, right?

But what do the Dumb Berserkers think?

Dumb Berserkers think: “I want to do this. Imma do it!”

They’ll network. They’ll introduce themselves as experts. They’ll pitch their services. They’ll charge more money for them. Berserkers are confident and hungry, no matter how dumb they may be.

And what does the market think?

The market thinks: We don’t need the best. We just need the job done well.

And so guess what happens?

And the fresh Smart Perfectionists are left trying to enter a market that’s even more crowded with experienced competitors than it was before!

Do you see what’s happening here?

This sucks for you. Your attention to quality and self-awareness screws you over: you gain skills and knowledge while the Dumb Berserkers get jobs and promotions and experience.

Also, it sucks for the market! They’re left with fewer awesome, talented, conscientious people to choose from, and they have to pick a Dumb Berserker or go without.

For example, let’s say you’re a web designer, and you’re a good one at that. But you can’t bring yourself to approach a prospect for a freelance project because your website just isn’t up to snuff.

But the people out there who need (and have budgeted for!) new websites aren’t waiting around for you to throw your hat in the ring. That means they won’t find you. If they’re lucky, they’ll find some other talented person. If they’re not, they’ll end up with a Dumb Berserker.

And by the time you enter the market, that client’s Web budget is GONE. That’s one less client for you, and one less great website for the customer.

Quit primping and be a Smart Berserker 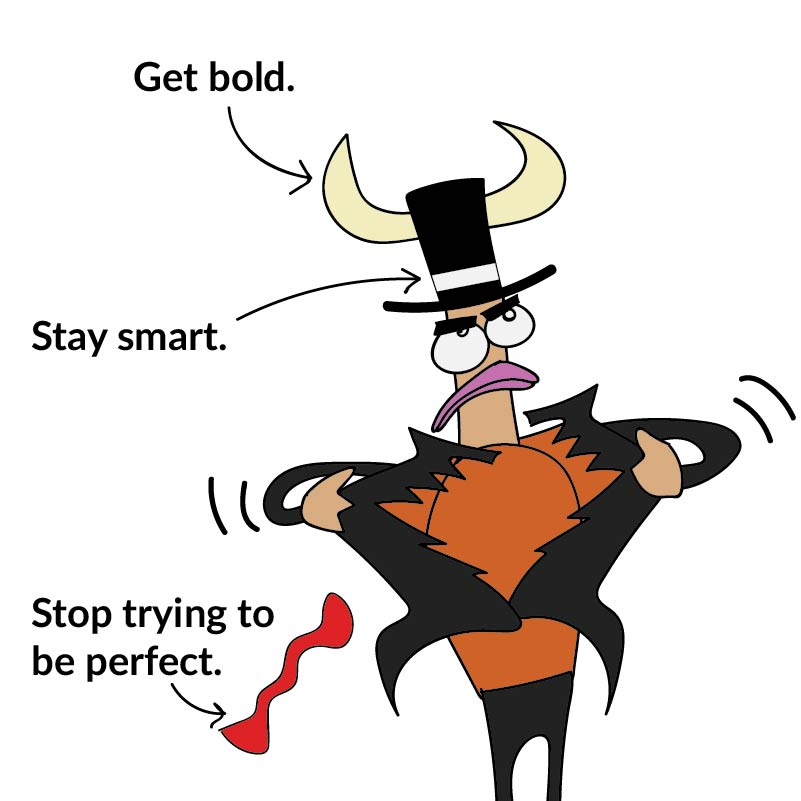 But give up your perfectionism. Give up on this silly need to only do things when you’re sure you’ve got a 100% chance of success.

It’s holding you back, and it’s depriving the market of your skills.

While you primp, Dumb Berserkers are getting all the glory and ruining the market.

How do you become a Smart Berserker?

Put yourself out there.

If you’re trying to make it as an entrepreneur: Send cold emails. Talk to strangers. Join Facebook groups full of people you want to reach—and participate in them.

If you’re trying to make it in the corporate world: Speak up in meetings. Take charge of new projects. Call out bad work and call attention to great work that other people are doing.

Stick your neck out. Be bold.

You might be asking, “Sure, but if I run off half-cocked before I’m 100% sure I’ve got everything perfect, how do I know I’m not just devolving into another Dumb Berserker?”

But I have some good news.

The fact that you’re asking that question means you’re probably not Dumb Berserker material. Here’s why:

How berzerk should I go?

I mean, you’re shooting for Smart Berserker. So don’t do dumb things.

In case you haven’t inferred this yet, being a Smart Berserker is a balance. And for some of us, it’s a lot safer to lean toward perfectionism than it is to lean toward berserkerness.

So it might help to set up some boundary marks.

When you find yourself saying, “I just need to X,” stop and ask yourself: “What do I lose by moving on right now?”

For example, if you’re not networking with people because you don’t have business cards, ask yourself, “What do I lose if I introduce myself to someone and I don’t have a card?”

This is important, because when you hold yourself up on things that don’t change behavior, you have two problems:

If it doesn’t change people’s behavior, don’t let it hang you up.

2. The critic you’re trying to please is irrelevant

Ask yourself: if this isn’t perfect, who are you afraid of getting in trouble with?

Who’s ridicule are you trying to avoid?

This happens to me all the time.

I used to work for someone who was, shall we say … aggressive in conversation with their employees.

I’d get demeaned any time I met with them, and they were the one responsible for approving most of my work.

To this day, that work environment has left its mark on me. I can’t write a single piece of copy or send a single cold email or put together a single campaign idea without imagining what kind of wringer I’d be put through if my old boss saw it.

But I can’t let that get in my way. Because when I allow that to take hold, it sucks up all my time.

That’s a dumb thing to do, because I don’t work for them anymore. And I’m not taking on clients like them, either. What’s the point of starting my own business if I’m just going to act as though I still work for terrible bosses?

My old boss is irrelevant.

There’s a good chance the person you’re most paranoid about displeasing isn’t the kind of person you want to work with, anyway.

What about my integrity?

That’s the balance, isn’t it? You need to find a way to take action while also being smart and true to your values.

Don’t take action when it violates your values.

But don’t value inaction, either.

And the only thing worse than a Dumb Berserker is a Dumb Perfectionist.

Want a nudge? I’ll help you.

Or, if you’re not sure whether you’re being too perfectionist, leave a comment telling me what you’re struggling with.

Either way, I’ll reply with some thoughts to help you push past the perfectionism and be a Smart Berserker. =)