Why contractors make (a lot) more than you 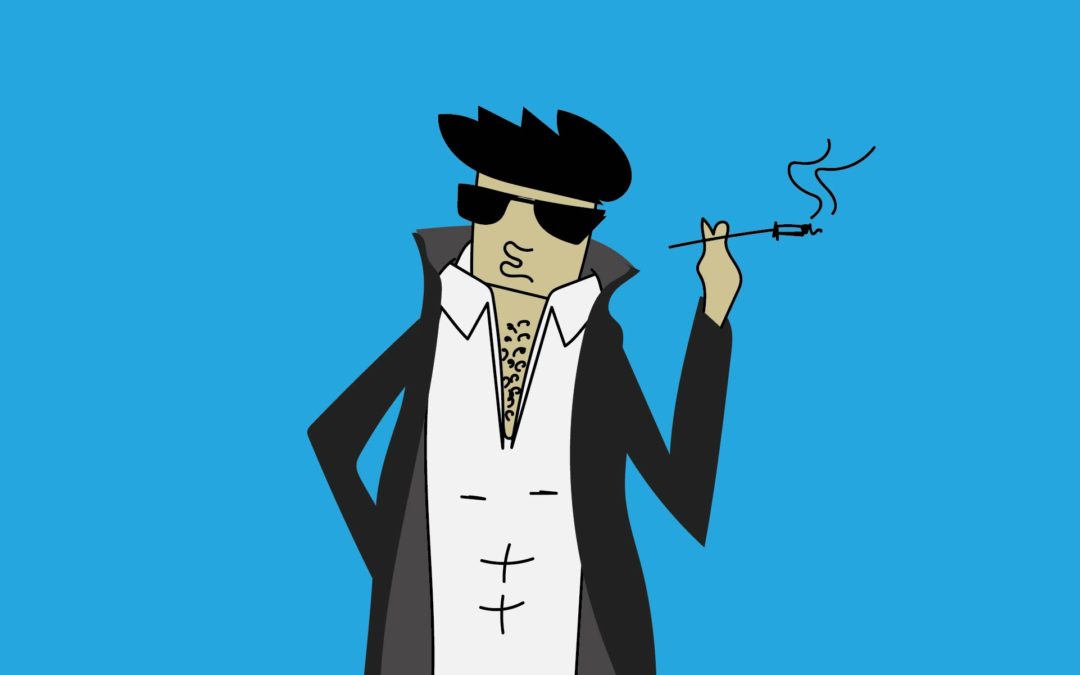 You do great work.

You’re not paid like crap, but you want more. You’ve asked for a raise a few times, but you’re not getting one for a while—or if you do, it’s not going to be nearly what you’re asking for.

If you’re in this position, then you’ve probably noticed something disturbing:

Your boss won’t give you a raise, but she’ll pay contractors more than you.

Even though you’re more skilled than they are.

Even though you have more knowledge of your company than they do.

Those contractors will make a lot more than you will.

This happened to me

We were working on the launch of a new product, trying to pick a name for it. The team had narrowed down their options to two, which we’ll call “Plantain” and “Banana.”

“Banana” was the obvious choice. When they asked me, I told them why I thought so. The target audience liked bananas. The target audience wanted to spend money on bananas. All the most powerful influencers in our market had written books about how great bananas were. And in our company’s mission statement was basically, “We love bananas.”

But the company wanted to play it safe, so they hired an outside contractor to do some market research.

The results came back: “Banana” was the winner.

And guess what? That contractor got paid more for that two-month project than I would get paid in a whole year.

I saw this happen, and like you, I thought, “I am in the wrong business.”

So I became a contractor. I started my own agency.

(About five times as much.)

Don’t get me wrong. I was at a great company. I had a fantastic manager and worked with some top-notch talent. Even the C-levels were generous with their time and attention to me and my teammates.

So if you read this and think, “managers are dumb,” you’re missing the point (and an opportunity to make more money).

Why do contractors get paid better than employees?

How can someone charge more for two months of contract work than you make in a whole year?

What possibly drives people to spend that much money?

And why can contractors safely charge such high prices?

Let’s take a look at a few reasons why an employer would pay a contractor a lot more than you.

First, let’s level the playing field. Let’s compare you to a contractor of equal skill, knowledge, and experience.

To you, you look the same. 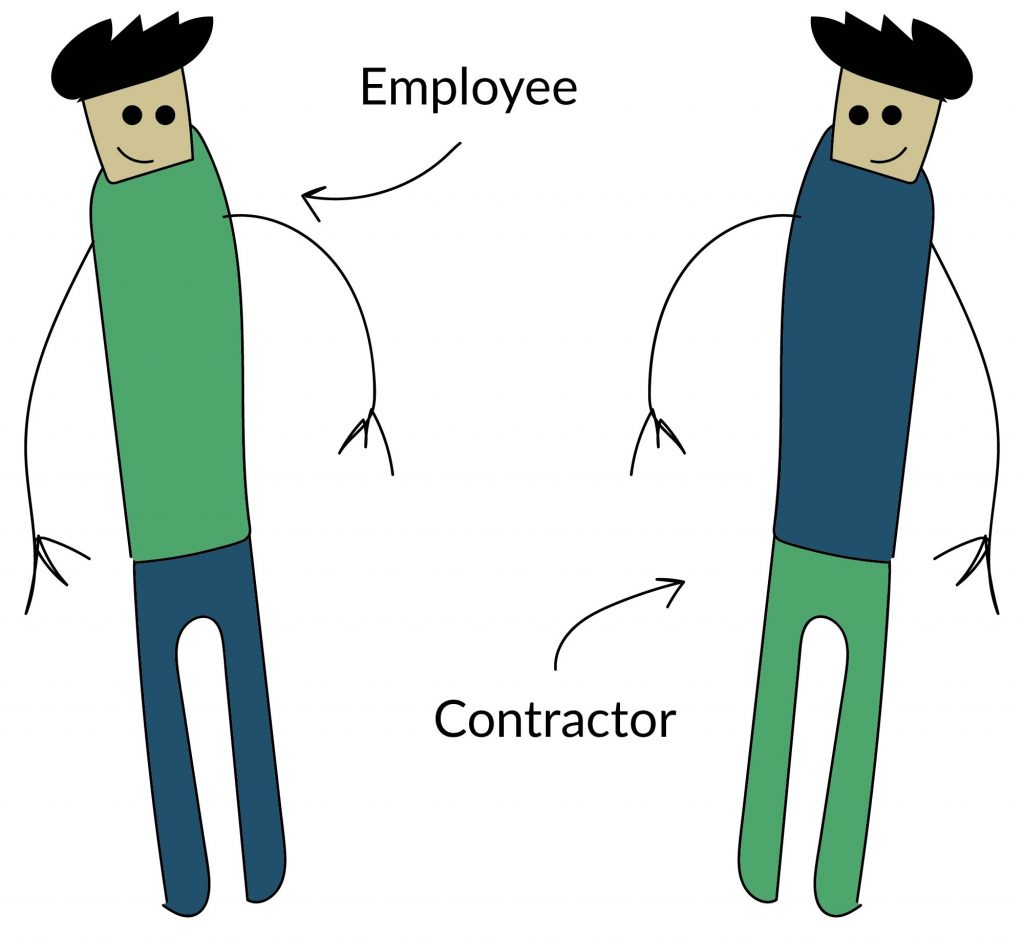 But to your boss, you look totally different.

The contractor is a sexy, adventurous, highly-skilled expert. You’re part of the corporate machine.

Let’s look at why your boss sees you both so differently.

1. Contractors aren’t dependent on your boss 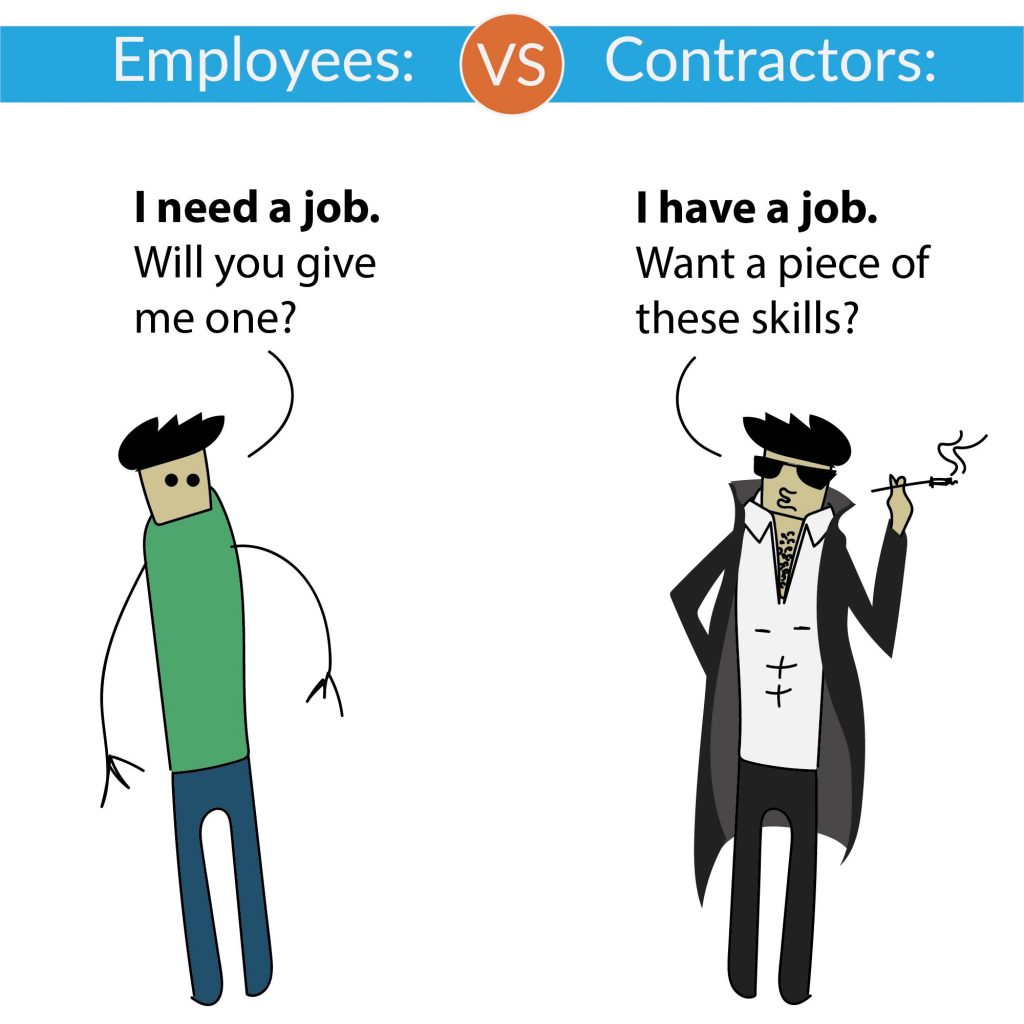 With the exception of some head-hunted individuals, most employers and employees meet in a certain context:

You need a job.

Which means you need your boss.

It also signals that you need someone coming up with work for you to do, creating and maintaining an environment for you to do the work in, and motivating you to accomplish the work.

Your employer knows that there are others like you out there who could do the job. But there are fewer employers than there are employees, so that makes you the one who’s more in need.

They know that you’re depending on them for rent, groceries, your kids’ clothes, etc.

But contractors? For us, it’s a different story.

When I talk to a prospect, it’s not because I need a job.

I already have a job. I have other clients keeping me afloat. My job is to sell your boss awesome services.

As far as your boss is concerned, you need them, but contractors don’t.

This makes contractors come across as more valuable. 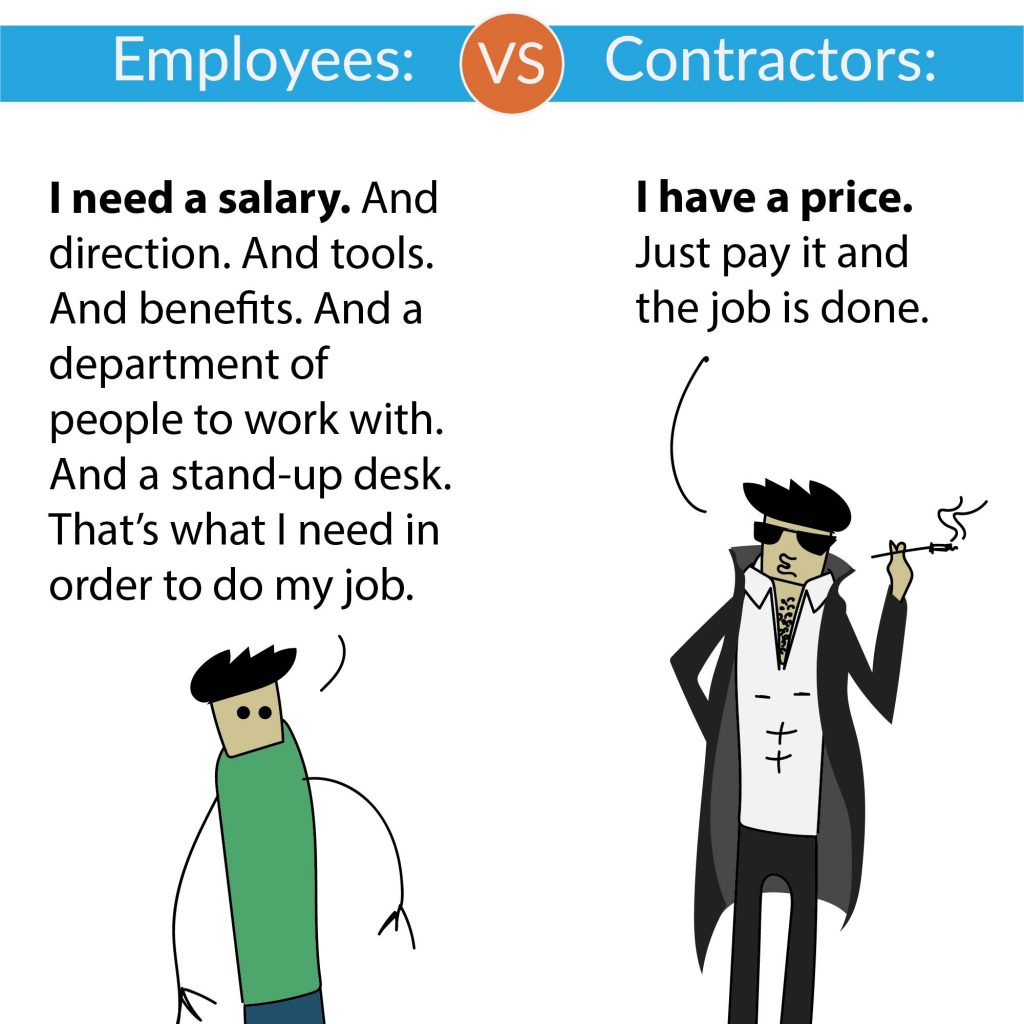 Companies pay for something of value in return.

They give employees and contractors money, so both can in turn provide value to the organization.

The difference is that employees cost on their employers more than just money. Your employer is responsible for all this crap too:

Direction. This takes up managers’ time, which is expensive.

Equipment. You need hardware, software, non-hazardous workspaces, etc. None of this is cheap.

Structure. Your employer is going to give you deadlines. They’ll assign you to a department. They’ll give you processes and coworkers and policies and regular check-in meetings. This takes up management time, too.

Benefits. That healthcare mandate, bro. And IRA planning can be a cash suck, too.

Termination. Even letting someone go can be an expensive ordeal. Depending on the laws of your state, an employer may be obligated to keep paying you long after you’ve shown that you’re not a good fit.

Bottom line: as an employee, your salary is just the beginning of your price tag.

And that means a contractor can charge more.

3. Your boss has less power over contractors 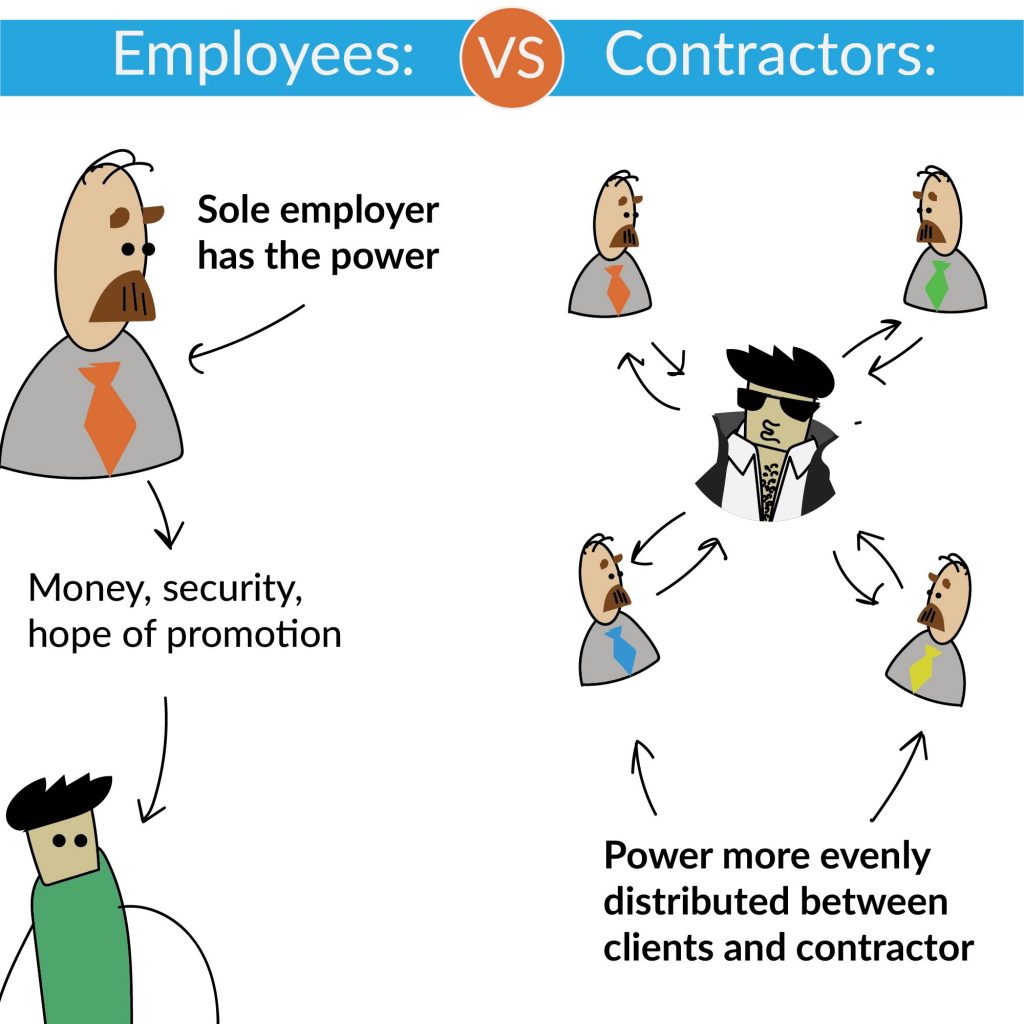 As an employee, your income is under your employer’s control.

And since this is your sole or primary source of income, your boss has most of the power here.

But with contractors, it’s a different story.

They’re getting income from multiple clients. And they’ve got multiple irons in the fire.

That means your boss can only have a fraction of the power over them that he has over you. Because of this, contractors have more power in the relationship, which means they can ask for more.

(Or at least they’re confident enough to ask for more!)

4. Contractors bet on themselves 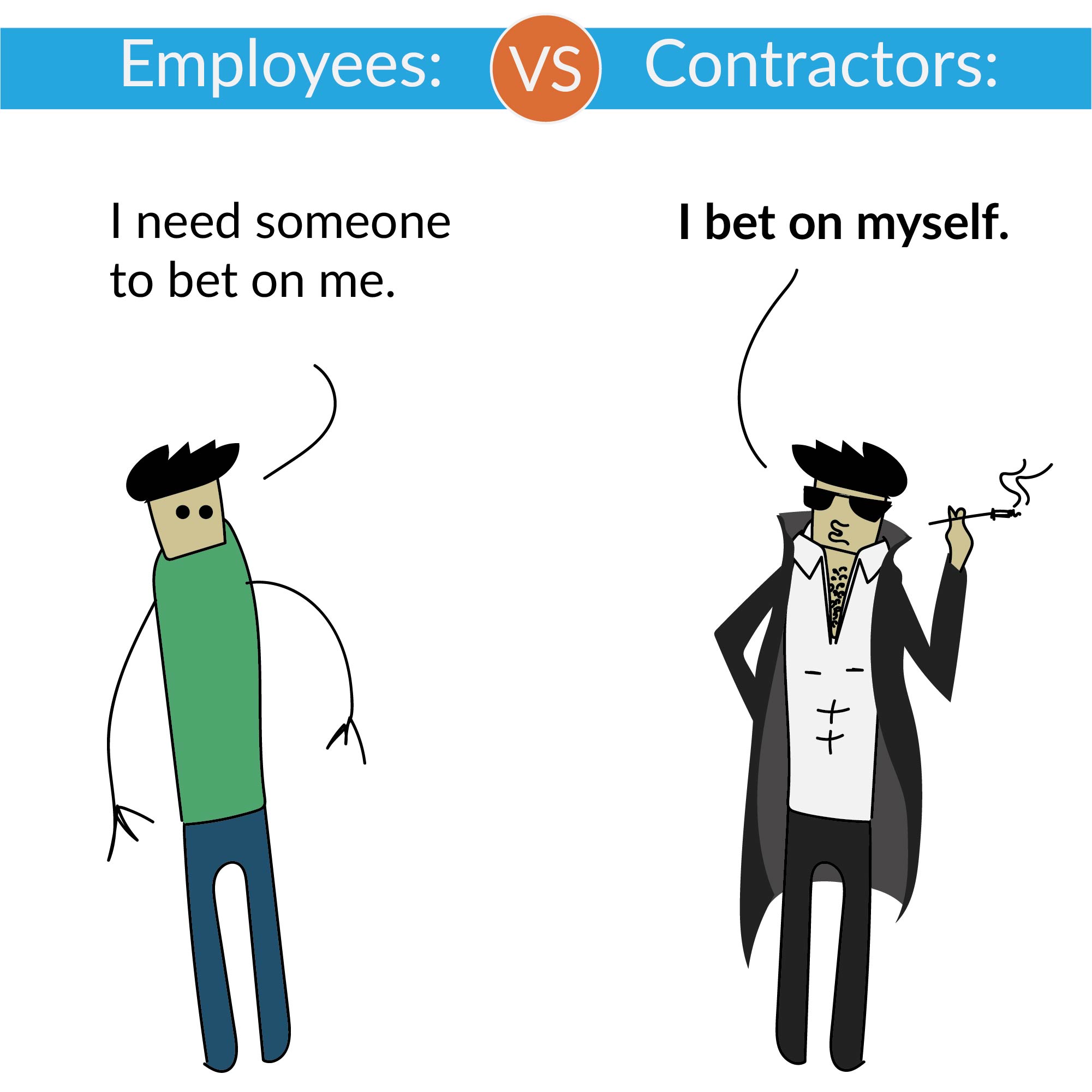 When you strike out on your own, you’re making a statement:

“I’m talented enough to thrive without depending on a job.”

It takes guts to say that. Your boss is likely to respect those guts.

Your boss thinks, “If they’re good enough to be out on their own, they must have some serious skills, right? Most new businesses fail—and they haven’t failed.

“Plus, their whole livelihood depends on their ability to price their services. If they overcharge, they won’t get any business. I can reasonably assume that they’ve charged similar prices for similar work on behalf of similar clients.”

See how that works? Just by being independent and setting their own prices, contractors gain some credibility.

But as an employee, you face a different situation.

As far as your boss is concerned, you need a job. And instead of betting on yourself (like the contractors do), you’re asking your employer to bet on you instead.

By giving you a job, your boss has already shown more confidence in you than you have in yourself.

Contractors get paid more than you

So … what are you going to do about it?

You have three options

You can get mad about it and demand more pay. But remember reason #2 why they’re getting paid so much more: you’re already pretty expensive.

So … good luck with that.

When you read through this list, you may think, “Dang. I actually have it pretty good as an employee. Sure, I could make more money if I quit and went solo, but it’s not really worth the headache or the risk.”

In which case, terrific! You’ve achieved contentment. Live thankfully and be happy.

If you’ve made it this far, you’re probably thinking what I was thinking as an employee:

“I am in the wrong business.”

You feel it. The call to bet on yourself.

The call to take more control over your income and your career.

You want to be an entrepreneur.

It feels good, doesn’t it?

So how do you quit and start your own gig?

Oh, man. That’s a great question. And it’s way, way, waaaaay beyond the scope of this post.

Good thing I wrote a whole other thing about it. =)

It’s called Before You Quit, and it outlines 10 practical ways to prepare yourself for going solo. Seriously, you can start tactics 1, 2, 3, and 9 today.